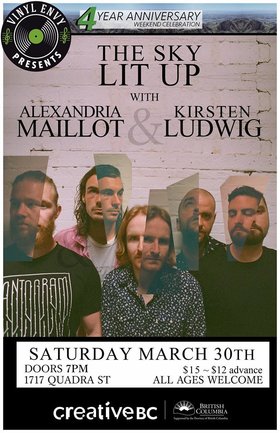 We are very proud to celebrate our 4-Year Anniversary Weekend with live musical performances each day in-store, and evening shows~ Support by Creative BC and the Province of British Columbia

The Sky Lit Up (Victoria, BC)
The Sky Lit Up return from a long hiatus to bring you mesmerizing psychedelic compositions of Eric Hogg (Hush Hush Noise) and his band of virtuoso musicians who do not mess around when it comes harmonic tension. Definitely treat yourself to this band live, and you'll easily lock into their psychedelic textures (swimming in pop sensibility)! The Sky Lit Up played our stage last year at RIFFLANDIA FESTIVAL 2018 and blew us all away~ They have all new music to debut for you for this show!♥

with
Alexandria Maillot
http://alexandriamaillot.com
Vancouver Island raised singer-songwriter (and record store favourite!), Alexandria Maillot, is carving her name in to the Canadian music landscape with her debut full-length, Time, released in 2016. Alexandria's lush vocals and reflective lyrical narratives have often garnered her comparisons to music heavyweights such as Feist and Basia Bulat, and "Time" has proven to be a body of work that has merited national radio attention and widespread critical acclaim amongst industry peers and music lovers alike.

and
Kirsten Ludwig (solo set!)
http://www.kirstenludwigmusic.com
Currently residing in Victoria, BC, Kirsten Ludwig has just released her full-length album with Kathryn Calder's Oscar St Records. ‘We Get It Now’ is an infusion of dream-pop, haunt-folk, and Canadiana; with its low-key atmosphere, thoughtful arrangements, and honest sound guiding the way - garnering influences from Beach House, Laura Marling, and Sharon Van Etten.

The Sky Lit Up (rock/pop/prog/alt/indie/experimental/psychedelic)